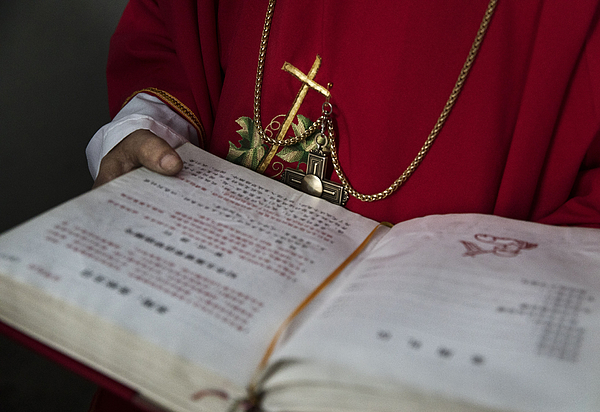 SHIJIAZHUANG, CHINA - APRIL 09: (CHINA OUT) A Chinese Catholic deacon holds a bible at the Palm Sunday Mass during the Easter Holy Week at an "underground" or "unofficial" church on April 9, 2017 near Shijiazhuang, Hebei Province, China. China, an officially atheist country, places a number of restrictions on Christians, allowing legal practice of the faith only at state-approved churches. The policy has driven an increasing number of Christians and Christian converts 'underground' to secret congregations in private homes and other venues. While the size of the religious community is difficult to measure, studies estimate more than 80 million Christians inside China; some studies support the possibility it could become the most Christian nation in the world in the coming years. Officially there have been no relations between China and the Vatican since the country's modern founding in 1949 though in recent years there have been signs of warming relations between Chinese president Xi Jinping and Pope Francis that could possibly allow greater religious freedom in the future. At present, the split means approved Chinese Christians worship within a state-sanctioned Church known as the Patriotic Association which regards the Communist Party as its leader, not the Pope in Rome. (Photo by Kevin Frayer/Getty Images)