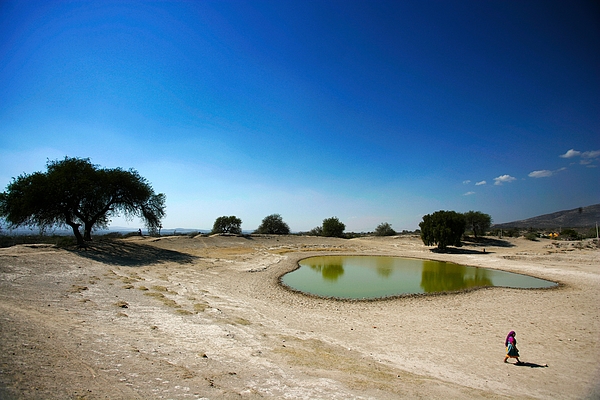 TEHUACAN, MEXICO - FEBRUARY 4: A Mexican woman skirts a Jaguey water hole, February 4, 2006 near San Marcos Tlacoyalco, Mexico. The Tehuacan Valley South-East of Mexico City has long experienced severe water shortages. Drought and climate change have contributed to this but recent industrial growth has also placed tremendous strain of a very limited ground water resource. Big industry has taxed this resource so severely that many small farmers and rural people have had no choice but to move closer to the cities and abandon their traditional lives. Water resources in the area area largely based on a weekly delivery by truck as well as collecting water from small pools known as Jagueys. This collected water was traditionally only used for animals but now more and more people are relying on it as a water source for crops and for drinking and bathing purposes. (Photo by Brent Stirton/Getty Images)