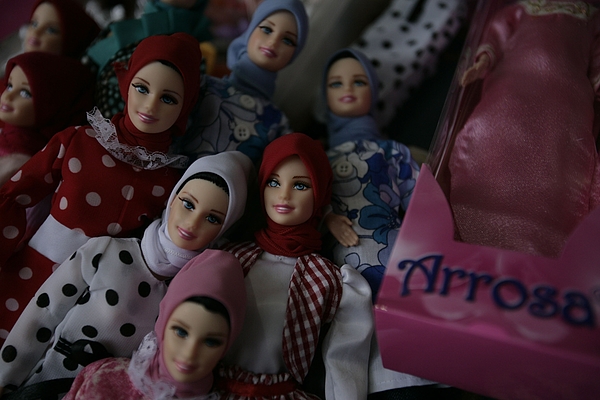 DEPOK, INDONESIA - JULY 12: A range of dolls are dressed in muslim hijab clothing; ready for assembling into retail packaging on July 12, 2007 in Depok, West Java, Indonesia. In August 2005, the Arrosa Muslim doll factory opened at a residential home with 7 female employees working on the production line; dressing generic Barbie look-a-like dolls that are produced in China in Muslim headscarves and clothing. Within 8 months of production, 800 dolls were sold out. The doll is on sale for Rp 60,000 (USD $7) while the clothing sells at Rp 25,000 (USD $3). Muslim headscarves are popular in Indonesia among women, where nearly 90 percent of its 235 million people are Muslims. (Photo by Dimas Ardian/Getty Images)