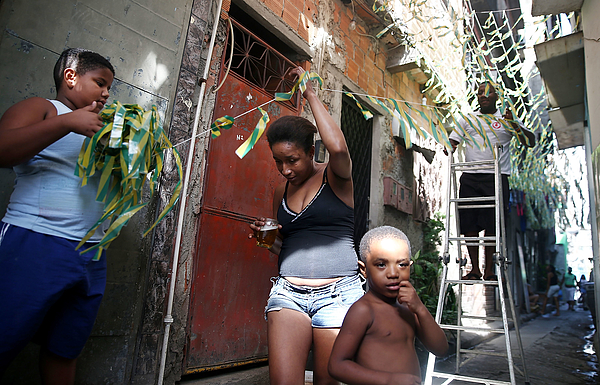 RIO DE JANEIRO, BRAZIL - JUNE 07: People gather and hang Brazilian streamers in the occupied Complexo da Mare, one of the city's largest 'favela' complexes, on June 7, 2014 in Rio de Janeiro, Brazil. The Brazilian government has deployed nearly 3,000 federal troops to occupy the group of violence-plagued slums ahead of the 2014 FIFA World Cup. The group of 16 communities house around 130,000 residents and had been dominated by drug gangs and militias. Brazil is in final preparations to host the World Cup which kicks off June 12. (Photo by Mario Tama/Getty Images)