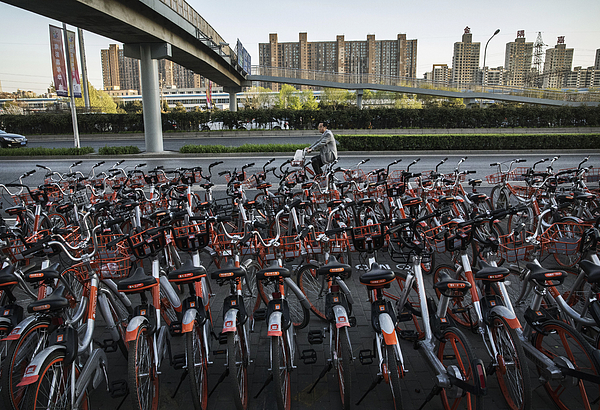 BEIJING, CHINA - APRIL 11: A Chinese commuter rides past a large group of Mobike ride share bicycles at a distribution area during rush hour on April 11, 2017 in Beijing, China. The popularity of bike shares has exploded in the past year with more than two dozen providers now battling for market share in major cities across China. The bikes are hailed as an efficient, cheap, and environmentally-friendly solution for commuters, where riders unlock the stationless bicycles using a mobile phone app, drop them anywhere for the next user, and spend as little as 1 yuan ($0.15) per hour. Given the bikes have several users a day - some of them inexperienced riders who swerve into traffic - they are often damaged, vandalized, or abandoned. Companies like Ofo routinely collect the battered two-wheelers and bring them to a makeshift depot that is part repair shop, part graveyard where they are either salvaged or scrapped. The bike shares are powering a cycling revival of sorts in a country once known as the 'Kingdom of Bicycles'. In the early years of Communist China, most Chinese aspired to own a bicycle as a marker of achievement. When the country's economic transformation made cars a more valued status symbol, the bicycle - a Chinese cultural icon - was mocked as a sign of backwardness. The bike share craze is also a boon for manufacturers who are now mass producing over a million bikes a month to meet demand, and the number of shared bike users will reach 50 million in China by the end of the year, according to Beijing-based BigData Research. Not everyone is cheering the revival though, as municipal officials are drafting new regulations to control the chaotic flood of bicycles on streets and sidewalks. (Photo by Kevin Frayer/Getty Images)