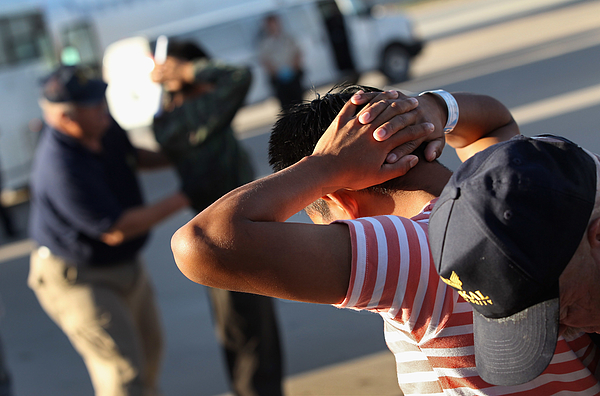 MESA, AZ - JUNE 24: Undocumented Guatemalan immigrants are body searched before boarding a deportation flight to Guatemala City, Guatemala at Phoenix-Mesa Gateway Airport on June 24, 2011 in Mesa, Arizona. The U.S. Immigration and Customs Enforcement agency, ICE, repatriates thousands of undocumented Guatemalans monthly, many of whom are caught in the controversial "Secure Communities" data-sharing program which puts local police on the frontlines of national immigration enforcement. ICE recently announced a set of adjustments to the federal program after many local communities and some states, including New York, insisted on opting out, saying immigrants were being deported for minor offenses such as traffic violations. Guatemala ranks only second to Mexico in the number of illegal immigrants deported from the United States. (Photo by John Moore/Getty Images)