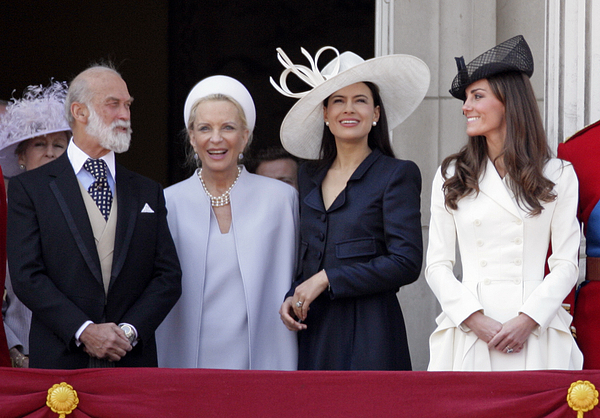 LONDON, UNITED KINGDOM - JUNE 11: (EMBARGOED FOR PUBLICATION IN UK NEWSPAPERS UNTIL 48 HOURS AFTER CREATE DATE AND TIME) Prince Michael of Kent, Princess Michael of Kent, Sophie Winkleman, Lady Frederick Windsor and Catherine, Duchess of Cambridge stand on the balcony of Buckingham Palace after the Trooping the Colour Parade on June 11, 2011 in London, England. The ceremony of Trooping the Colour is believed to have first been performed during the reign of King Charles II. In 1748, it was decided that the parade would be used to mark the official birthday of the Sovereign. More than 600 guardsmen and cavalry make up the parade, a celebration of the Sovereign's official birthday, although the Queen's actual birthday is on 21 April. (Photo by Indigo/Getty Images)