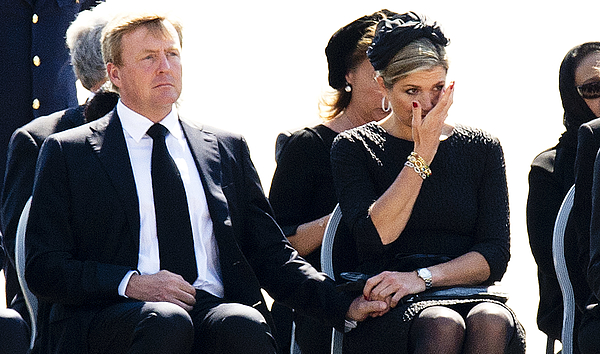 EINDHOVEN, NETHERLANDS - JULY 23: King Willem-Alexander and Queen Maxima of The Netherlands attend a ceremony upon the arrivals of a plane from Ukraine, carrying the remains of victims of downed Malaysia Airlines flight MH17, at Eindhoven Airbase on July 23, 2014 in Eindhoven, Netherlands. Today the people of the Netherlands are holding a national day of mourning. Malaysian Airlines flight MH17 was travelling from Amsterdam to Kuala Lumpur when it crashed in eastern Ukraine killing all 298 passengers. The aircraft was allegedly shot down by a missile and investigations continue to find the perpetrators of the attack. (Photo by Robin Utrecht PhotographyGetty Images)

There are no comments for The Bodies Of The MH17 Plane Crash Are Repatriated From The Ukraine To The Netherlands.   Click here to post the first comment.