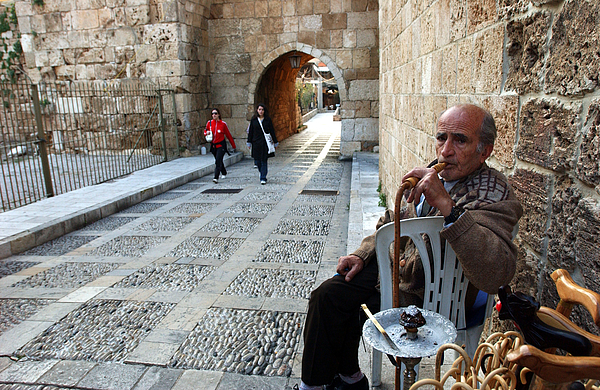 BYBLOS, LEBANON - FEBRUARY 26: A Lebanese man smokes shisha at the tourist market of the exclusive marina of Byblos on February 26, 2005, 50 Km north of Beirut, Lebanon.Tens of thousands of Lebanese protesters have taken to the streets of Beirut in the last weeks, since the assassination of former Prime Minister Rafik Hariri, demanding that Syrian troops leave the country. According to the Lebanese government, under international pressure, Syria will redeploy its troops in the Bekaa Valley towards the border. A UN-appointed commission arrive in Lebanon to join the investigation into the assassination of former prime minister Rafiq Hariri. Due to the uncertain political situation many people in Beirut are staying away from cafes, restaurants, clubs and shopping malls. (Photo by Marco Di Lauro/Getty Images)