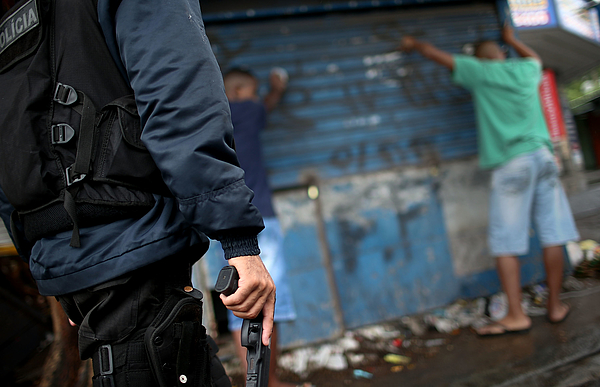 RIO DE JANEIRO, BRAZIL - MARCH 23: A Military Police officer holds his weapon while watching suspects in the Complexo do Alemao pacified 'favela' community on March 23, 2014 in Rio de Janeiro, Brazil. The 'favela' was previously controlled by drug traffickers and is now occupied by the city's Police Pacification Unit (UPP). A number of UPP's were attacked by drug gang members on March 20 and some pacified favelas will soon receive federal forces as reinforcements. The UPP are patrolling some of Rio's favelas amid the city's efforts to improve security ahead of the 2014 FIFA World Cup and 2016 Olympic Games. (Photo by Mario Tama/Getty Images)