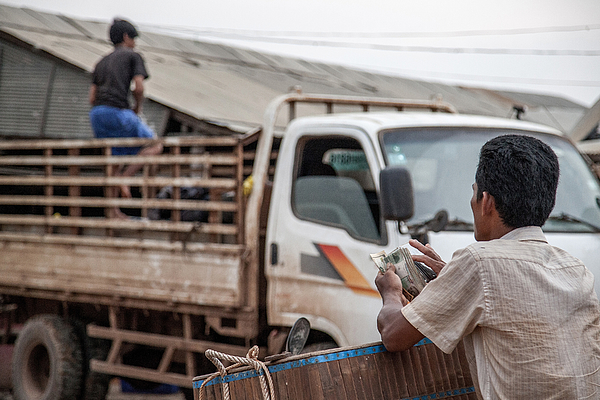 SIEM REAP, CAMBODIA - APRIL 23: A man counts dollar bills near the fishing docks of Chong Kneas on April 23, 2014 in Siem Reap, Cambodia. Fishing in Chong Kneas is controlled by a few companies that allow some families to fish. Most of the residents of this floating village have been affected by Government Laws, losing their rights to fish in the lake. Home to hundreds of thousands of people living in floating villages, the Tonle Sap has been a source of livelihood for people for generations, people who make a living predominantly from fishing the lake's close to 150 species of fish. But although the Cambodian government banned large-scale fish in 2012, fish stocks are continuing to decrease - due to rapid increases in population size, illegal fishing, environmental changes and the construction of dams upstream to the lake - putting these communities an their traditional way of life at risk. With little employment opportunities available other than fishing or running a shop, coupled with growing demands for better educational opportunities, the traditional floating villages of the Tonle Sap Lake may soon disappear. (Photo by Omar Havana/Getty Images)