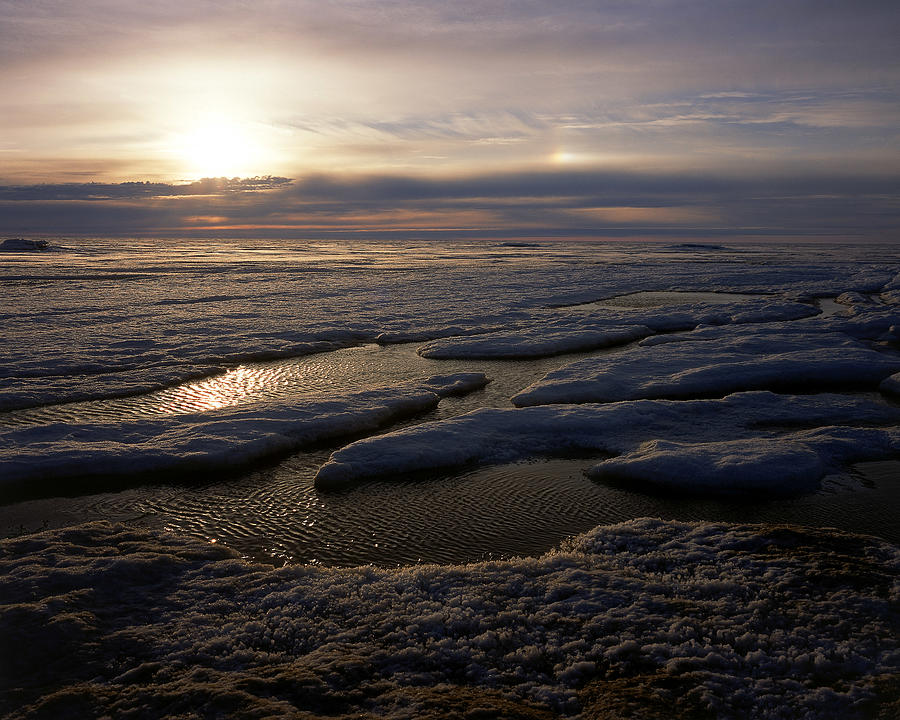 BARROW, AK - AUGUST 2001: The view from a bush plane as it approaches Cooper Island August 2001 off of Barrow, Alaska. Ornithologist George Divoky has journeyed to Cooper Island off the coast of Barrow, Alaska to study sea birds called black guillemots. At first he studied the birds' nesting and mating habits among abandoned island debris. Recently, Divoky, who lives on the frigid isle for the 3-month Arctic "summer," has become aware that his study sheds light on the phenomenon of global warming. The Arctic is mostly ocean covered by 9 feet of ice for most of the year. Because of its blinding surface, it reflects the sun's rays. But when the polar summer comes with its 24-hour days, more than one-half of the ice pack melts, and what was a heat reflecting surface becomes a heat absorbing surface. Combine this natural cycle with the warming effect that results from humans burning fossil fuels, and a "positive feedback loop" occurs as ice recedes, more open water is exposed, which absorbs more heat, which causes more ice to melt and so on until the polar ice cap disappears. In 1995 Vice President Al Gore created a task force on global warming and the call went out to scientists for any studies pertaining to the phenomenon. Divoky then examined why the guillemots seemed to be returning to Cooper Island earlier each year. His figures matched perfectly with Barrow records showing a steady pattern of earlier and earlier ice outs. Further, when Divoky measured the carbon isotope delta 13C in the feathers of guillemots preserved for museums from as long ago as the 1850's his figures showed that the birds had to fly less further south each year to fish during the winter. Divoky's studies of black guillemots have tracked with accuracy a 150-year global warming trend that few scientists can refute. (Photo by Joe McNally/Getty Images)