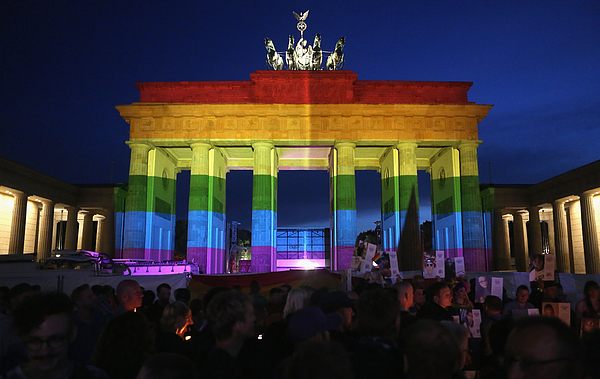 BERLIN, GERMANY - JUNE 18: The Brandenburg Gate is seen with a rainbow flag projected onto it during a vigil for victims of a shooting at a gay nightclub in Orlando, Florida nearly a week earlier, in front of the United States embassy on June 18, 2016 in Berlin, Germany. Fifty people were killed and at least as many injured during a Latin music event at the Pulse club in the worst terror attack in the U.S. since 9/11. The American-born gunman had pledged allegiance to ISIS, though officials have yet to find conclusive evidence of his having any direct connection with foreign extremists. The incident has added fuel to the ongoing debate about gun control in the country. (Photo by Adam Berry/Getty Images)