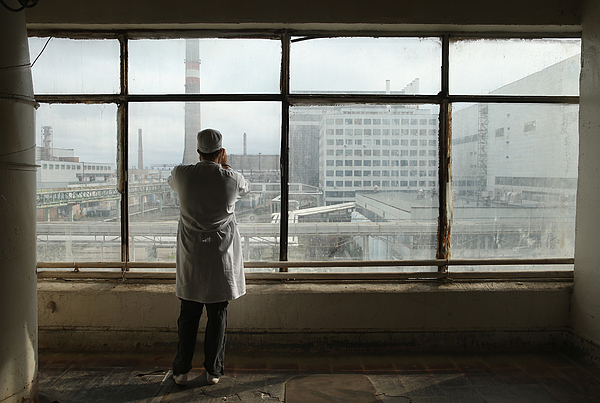 CHORNOBYL, UKRAINE - SEPTEMBER 29: A visitor touring the former Chernobyl nuclear power plant takes a photo through a window looking towards facilities that house reactors one and two on September 29, 2015 near Chornobyl, Ukraine. The Chernobyl plant is currently undergoing a decades-long decommissioning process of reactors one, two and three, which continued operation for years following the accident at reactor four. On April 26, 1986, technicians at Chernobyl conducting a test inadvertently caused reactor number four, which contained over 200 tons of uranium, to explode, flipping the 1,200 ton lid of the reactor into the air and sending plumes of highly radioactive particles and debris into the atmosphere in a deadly cloud that reached as far as western Europe. 32 people, many of them firemen sent to extinguish the blaze, died within days of the accident, and estimates vary from 4,000 to 200,000 deaths since then that can be attributed to illnesses resulting from Chernobyl's radioactive contamination. Today large portions of the inner and outer Chernobyl Exclusion Zone that together cover 2,600 square kilometers remain contaminated. A consortium of western companies is building a movable enclosure called the New Safe Confinement that will cover the reactor remains and its fragile sarcophagus in order to prevent further contamination. (Photo by Sean Gallup/Getty Images)