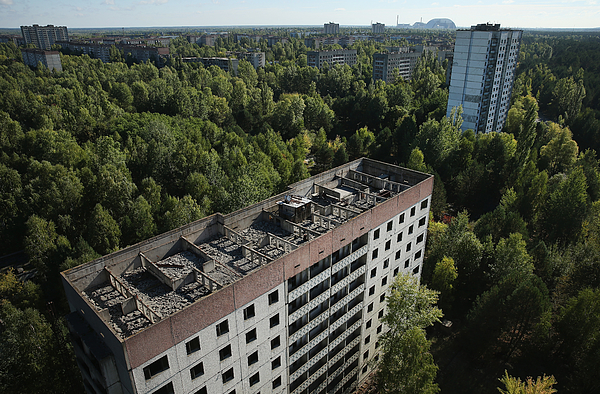 PRIPYAT, UKRAINE - SEPTEMBER 30: The former Chernobyl nuclear power plant, including destroyed reactor four (C), as well as the New Safe Confinement structure (R) that will one day enclose the remains of reactor four, stand behind the abandoned city of Pripyat on September 30, 2015 near Pripyat, Ukraine. Pripyat lies only a few kilometers from Chernobyl and was built in the 1970s to house the plant's workers and their families. On April 26, 1986, technicians at Chernobyl conducting a test inadvertently caused reactor number four to explode, sending plumes of highly radioactive particles and debris into the atmosphere. Authorities evacuated 120,000 people from the area, including 43,000 from Pripyat. Today Pripyat is a ghost-town, its apartment buildings, shops, restaurants, hospital, schools, cultural center and sports facilities derelict and its streets overgrown with trees. The city lies in the inner exclusion zone around Chernobyl where hot spots of persistently high levels of radiation make the area uninhabitable for thousands of years to come. (Photo by Sean Gallup/Getty Images)