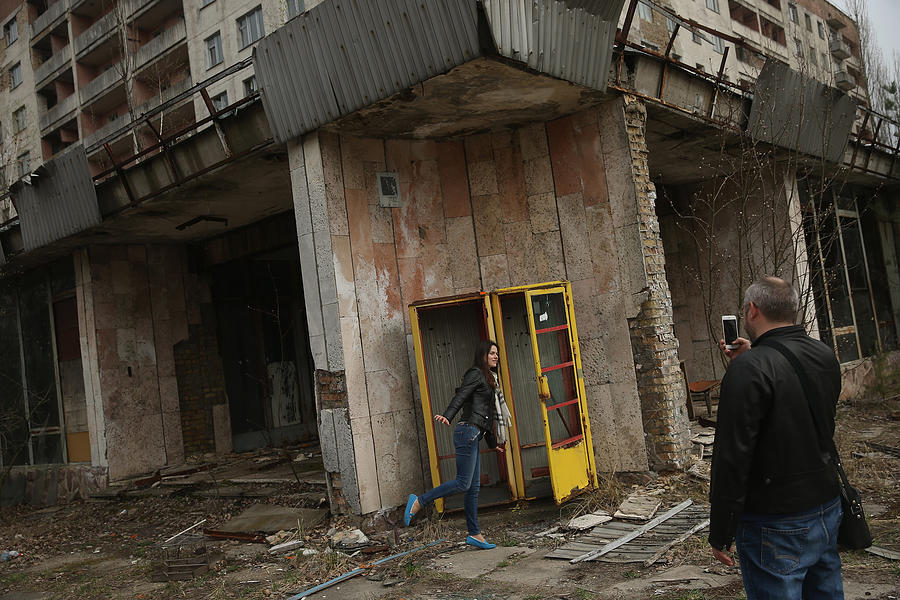 PRIPYAT, UKRAINE - APRIL 09: Tourists on a guided tour snap photos of one another outside an abandoned shop and apartment building on April 9, 2016 in Pripyat, Ukraine. Pripyat, built in the 1970s as a model Soviet city to house the workers and families of the Chernobyl nuclear power plant, now stands abandoned inside the Chernobyl Exclusion Zone, a restricted zone contaminated by radiation from the 1986 meltdown of reactor number four at the nearby Chernobyl plant in the world's worst civilian nuclear accident that spewed radiaoactive fallout across the globe. Authorities evacuated approximately 43,000 people from Pripyat in the days following the disaster and the city, with its high-rise apartment buildings, hospital, shops, schools, restaurants, cultural center and sports facilities, has remained a ghost-town ever since. The world will soon commemorate the 30th anniversary of the April 26, 1986 Chernobyl disaster. Today tour operators bring tourists in small groups to explore certain portions of the exclusion zone. (Photo by Sean Gallup/Getty Images)