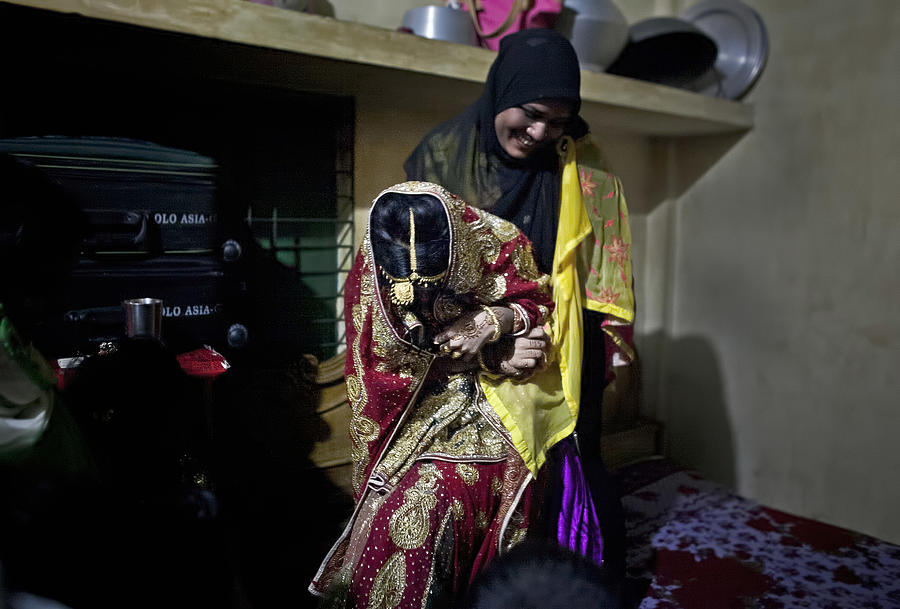 MANIKGANJ, BANGLADESH - AUGUST 20: A relative tries to drag 15 year old Nasoin Akhter onto a bed to pose for photographs on the day of her wedding to a 32 year old man, August 20, 2015 in Manikganj, Bangladesh. In June of this year, Human Rights Watch released a damning report about child marriage in Bangladesh. The country has one of the highest rates of child marriage in the world, with 29% of girls marrying before the age of 15, and 65% of girls marrying before they turn 18. The detrimental effects of early marriage on a girl cannot be overstated. Most young brides drop out of school. Pregnant girls from 15-20 are twice as likely to die in childbirth than those 20 or older, while girls under 15 are at five times the risk. Research cites spousal age difference as a significant risk factor for violence and sexual abuse. Child marriage is attributed to both cultural tradition and poverty. Parents believe that it "protects" girls from sexual assault and harassment. Larger dowries are not required for young girls, and economically, women's earnings are insignificant as compared to men's. (Photo by Allison Joyce/Getty Images)