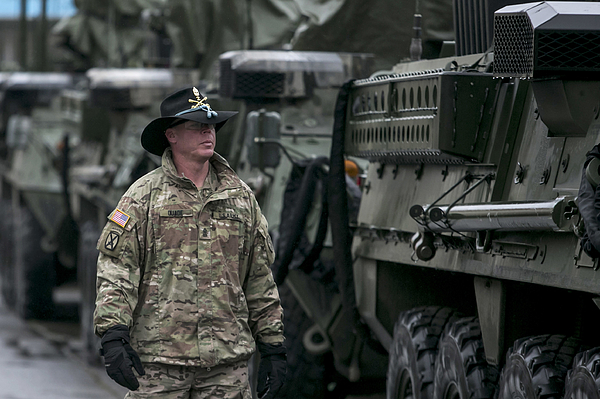 PRAGUE, CZECH REPUBLIC - MARCH 31: A U.S. soldier from the 3rd Squadron, 2nd Cavalry Regiment of the US Army walks past Stryker armored vehicles at the Czech army barracks on March 31, 2015 in Prague, Czech Republic. U.S. soldiers are traveling in the 'Dragoon Ride' convoy from Estonia to their home base in Vilseck, Bavaria, Germany. The soldiers have been taking part in Operation Atlantic Resolve exercises in the Baltic countries, designed to show that NATO is prepared to defend its members. The exercises were launched last year in response to Russia's aggression in the Ukraine. (Photo by Matej Divizna/Getty Images)