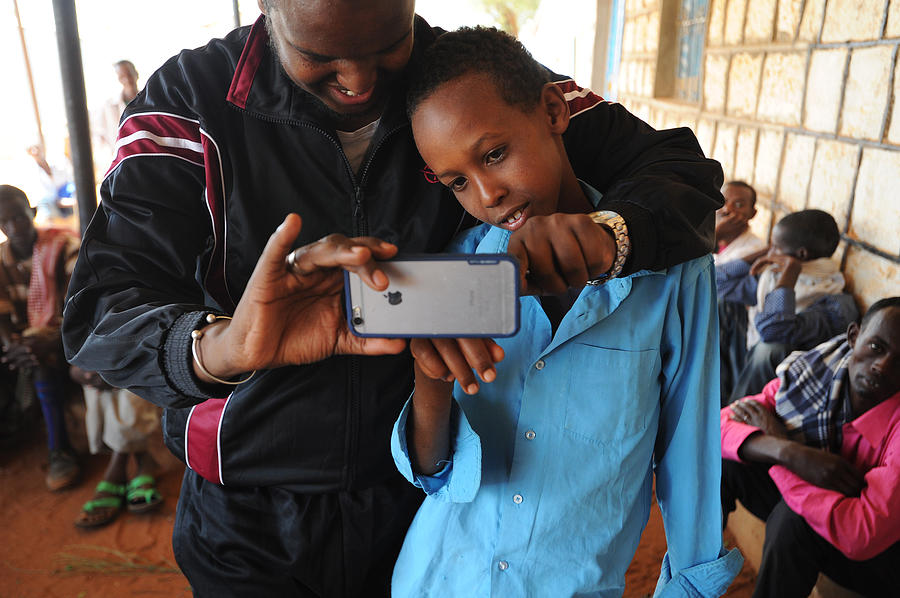 UNUNLEY, SOMALIA - JUNE 19: A Somali boy is taught how to take a photograph using an iPhone by Barkhad Kaariye, a correspondent for the Voice of America (VOA) Somali service, as villagers who have benefited from food and cash donations mobilized by a WhatsApp group called "Daryeel" (Caring), formed by diaspora Somalis from their own clan from around the world, gather as the Horn of Africa faces severe drought in Ununley, 130 miles east of the capital Hargeisa, Somalia, on June 19, 2017. Started six months ago as the the goats, sheep and camels of this pastoralist community began to die off, the WhatsApp group raised $255,000 to provide critical food and water for 864 families in 39 villages, an example of 21st-century social messaging software helping ease an ancient problem in drought-stricken regions. The UN and aid agencies have sought to raise resilience in such communities where livestock has been decimated by up to 80 percent, leaving 6.7 million people in need of assistance to avoid famine in Somalia and Somaliland. (Photo by Scott Peterson/Getty Images)