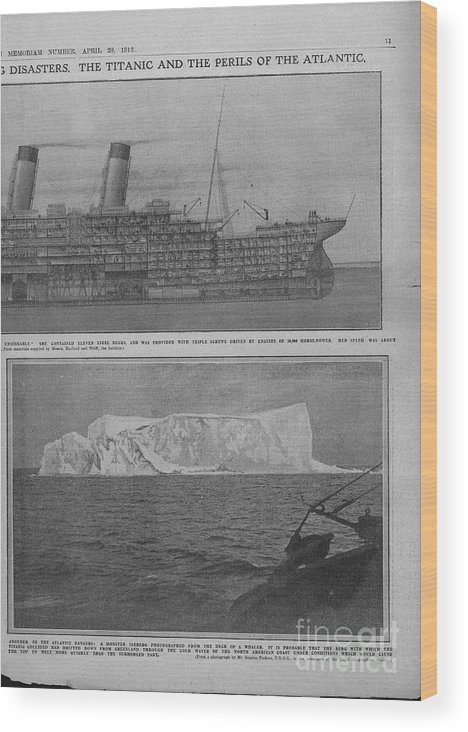 Sectional Diagram Of The Titanic by Print Collector - 7" x 10"

Sectional Diagram Of The Titanic wood print by Print Collector.   Bring your artwork to life with the texture and added depth of a wood print. Your image gets printed directly onto a sheet of 3/4" thick maple wood. There are D-clips on the back of the print for mounting it to your wall using mounting hooks and nails (included).

Sectional diagram of the 'Titanic', and iceberg, April 20, 1912. 'The Greatest of All Ships and the Greatest of All Shipping Disasters. The Titanic and the Perils of the Atlantic': sectional diagram of the 'Titanic', showing the state rooms, cabins, cargo holds and engine rooms, and illustration of an iceberg. The White Star Line ship RMS 'Titanic' struck an iceberg in thick fog off Newfoundland on 14 April 1912. She was the largest and most luxurious ocean liner of her time, and thought to be unsinkable. In the collision, five of her watertight compartments were compromised and she sank. Out of the 2228 people on board, only 705 survived. A major cause of the loss of life was the insufficient number of lifeboats she carried. Page 11, from "Titanic In Memoriam Number", a special supplement in "The Daily Graphic" newspaper issued following the sinking of the 'Titanic' on 15 April 1912, published on 20 April 1912. Artist Unknown. (Photo by The Print Collector/Getty Images)Image provided...