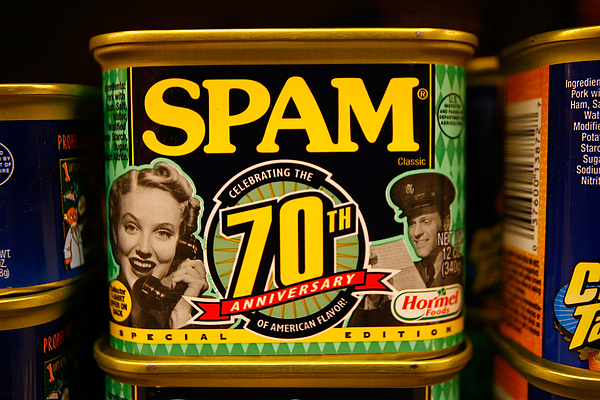 SIERRA MADRE, CA - MAY 29: Seventieth anniversary cans of Spam, the often-maligned classic canned lunch meat made by Hormel Foods, are seen on a grocery store shelf May 29, 2008 in Sierra Madre, California. With the rise in food prices, sales of Spam are increasing as consumers look for ways to cut their food bills. According to the US Agriculture Department, the price of food is rising at the fastest rate since 1990. Increasingly expensive staples include such items as white bread, up 13 percent over last year, butter, up nine percent, and bacon at seven percent. The increasing sales have translated to 14 percent higher profits for Hormel. Spam was created in 1937 and was popularized as a staple food for World War II Western allied forces. (Photo by David McNew/Getty Images)

There are no comments for Sales Of Low Cost Canned Meat Spam On The Rise Amid Rising Food Cost.   Click here to post the first comment.