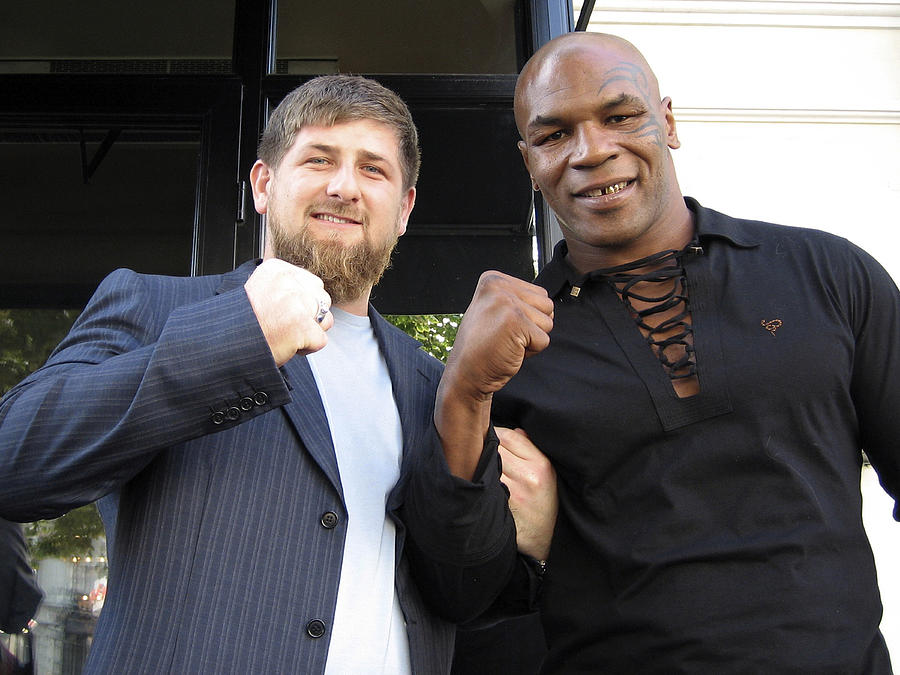 GUDERMES, CHECHNYA, RUSSIA - MARCH 2006: Ramzan poses with Mike Tyson during a trip the American boxer made to Chechnya in September 2005. Tyson travelled to the eastern city of Gudermes as the guest of honour at a boxing tournament. The competition was being held in memory of assassinated Chechen president Akhmad Kadyrov. The boxer told the crowd: "I always watched the situation in Chechnya on television, but it is a much more difficult occasion with you today." He also said that when he boxed, it was not for himself but for all Muslims in the world, including Chechens whom he considers to be his brothers. Tyson converted to Islam after being sentenced to six years in prison for rape in 1992. Ramzan was born 5 October 1976 in Tsenteroi, Chechnya, and was made Prime Minister of Chechnya in the beginning of March 2006 and leader of a powerful Chechen militia known as kadyrovtsy. He is the son of former Chechen President Akhmad Kadyrov, who was assassinated in May 2004. He has the backing of Russian President Vladimir Putin, and was awarded the Hero of Russia medal, the highest honorary title of the Russian Federation. As the head of the Chechen Presidential Security Service, Kadyrov has often been accused of being brutal, ruthless and antidemocratic; according to media and human rights groups, he was personally implicated in several instances of torture and murder. It is also rumoured that he owns a private prison in his stronghold village of Tsenteroi, where he uses inmates as a punching bags. Kadyrov is known for keeping a pet lion cub, given to him as a gift after the birth of his first son, as well as a tiger and a number of a fighting dogs, and also used to own a wolf and a bear. He has only a few classes of elementary education finished; despite his lack of education, Kadyrov is a honorary member of the Russian Academy of Sciences. (Photo by Kadyrov Press Office/Getty Images)