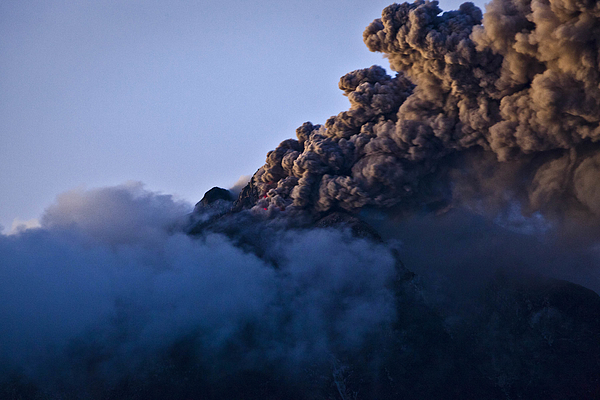 BERASTEPU, NORTH SUMATRA, INDONESIA - NOVEMBER 24: Mount Sinabung pyroclastic smoke, seen from Berastepu village on November 24, 2013 in Karo district, North Sumatra, Indonesia. Mount Sinabung, which has been intermittently erupting since September, has erupted eight times in just a few hours overnight. Officials have reported of rocks raining down over a large area, forcing thousands to flee their homes. The Indonesian government has called for people living within five kilometres (3.1 miles) of the volcano, on the northern tip of Sumatra Island, to evacuate their homes as the volcanology agency raised the alert level for the volcano to the highest point on a four-stage scale. (Photo by Ulet Ifansasti/Getty Images)