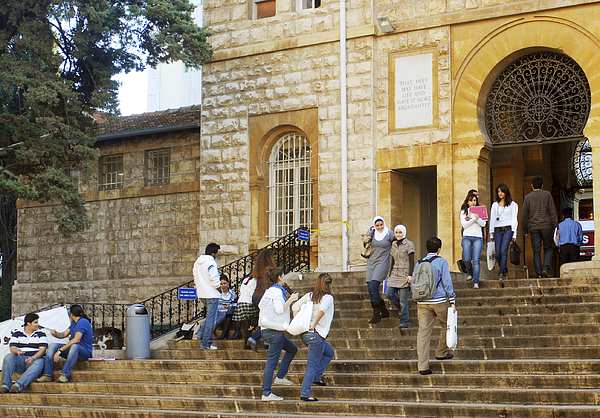 BEIRUT, LEBANON - OCTOBER 29, 2008: Veiled Muslims enter the university campus alongside other male and female students. The American University of Beirut (AUB) was founded in 1866 as a private, independent, non-sectarian institution of higher learning, functioning under a charter from the State of New York. AUB has grown from 16 students in a rented house to a major university with over 7,000 students located on a 73-acre campus overlooking the Mediterranean Sea. The University is governed by an autonomous Board of Trustees comprised of international leaders in business, education, diplomacy, engineering, philanthropy, science, and medicine. The University stresses high academic standards and is committed to the ideals of critical thinking, open debate, and diversity. AUB is a coeducational institution that is open to all qualified students without regards to race, religion, economic status, or political affiliation. (Photo by Kaveh Kazemi/Getty Images)