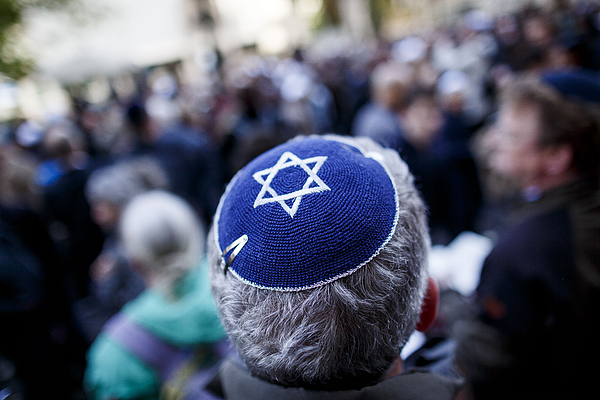 Jewish Community Calls For Kippah Gathering To Protest Against Anti-Semitism

Jewish Community Calls For Kippah Gathering To Protest Against Anti-Semitism

BERLIN, GERMANY - APRIL 25: A participant wears a kippah during a "wear a kippah" gathering to protest against anti-Semitism in front of the Jewish Community House on April 25, 2018 in Berlin, Germany. The Jewish community made a public appeal for Jews and non-Jews to attend the event and wear a kippah as a show of solidarity. The effort was sparked by a recent incident in Berlin in which a Syrian Palestinian man berated and struck with his belt a man wearing a kippah. The kippah-wearer was not Jewish, but an Israeli Arab who wore the kippah curious what reaction he might receive while walking in Berlin. In 2017 Germany reportedly recorded 1453 criminal offenses related to anti-Semitism, of which 94 percent were attributed to German citizens. (Photo by Carsten Koall/Getty Images)