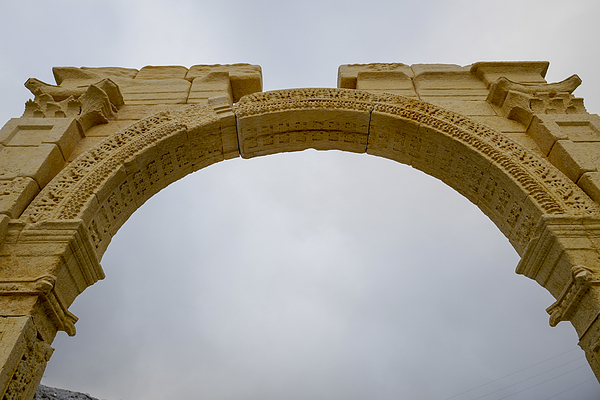 CARRARA, ITALY - APRIL 12: Detail of the newly completed 3D marble replica of the Palmyra's Arch of Triumph at the marble caves of Carrara on April 12, 2016 in Carrara, Italy. A 15 metre 3D marble replica of the Arch of Triumph that originally stood at Palmyra, Syria, will be erected in London's Trafalgar Square on Tuesday 19th April to celebrate World Heritage Week. The original was a Roman ornamental archway dating from the 3rd century and was destroyed by ISIS terrorists in October 2015. The replica arch has been created by experts from Oxford and Harvard universities and the Institute for Digital Archaeology (IDA) who built it using 3D imaging produced from hundreds of photographs of the monument. The replica arch will also visit New York and Dubai. (Photo by Marco Secchi/Getty Images)

There are no comments for Finishing Touches Are Made To A Replica Of The Triumphal Arch That Stood At Palmyra.   Click here to post the first comment.