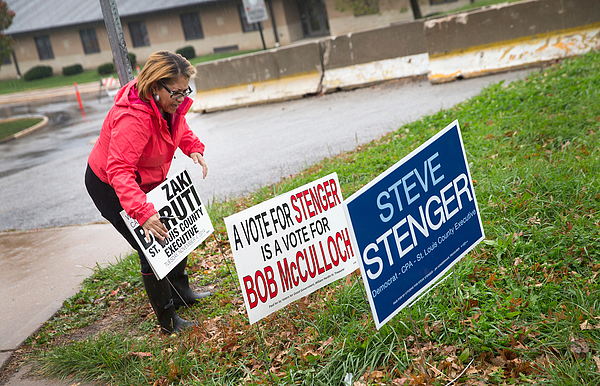 FERGUSON, MO - NOVEMBER 04: A campaign volunteer places a sign for a write-in candidate outside a polling place on November 4, 2014 near Ferguson, Missouri. In last Aprils election only 1,484 of Ferguson's 12,096 registered voters cast ballots. Community leaders are hoping for a much higher turnout for this election. Following riots sparked by the August 9 shooting death of Michael Brown by Darren Wilson, a Ferguson police officer, residents of this majority black community on the outskirts of St. Louis have re-examined race relations in the region and hope to take a more active role in the region's politics. Two-thirds of Fergusons population is African American, but five of its six city council members are white, as is its mayor, six of seven school board members and 50 of its 53 police officers. (Photo by Scott Olson/Getty Images)