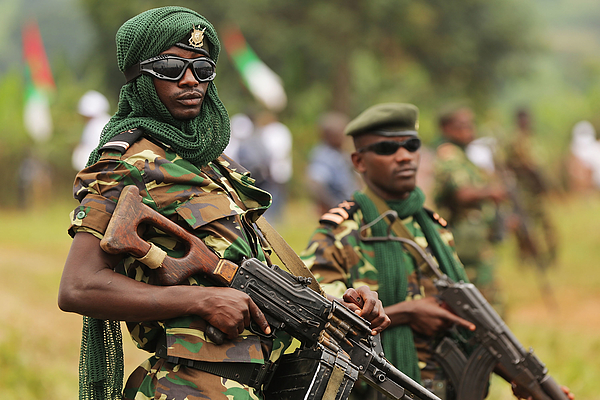 BUSONI, BURUNDI - JUNE 25: Elite military units keep guard as President Pierre Nkurunziza kicks off his official campaign for the presidency at a rally on June 25, 2015 in Busoni, Burundi. Nkurunziza has been President of Burundi since 2005 and is with the Defense of Democracy-Forces for the Defense of Democracy (CNDD-FDD) party. The head of Burundi's influential rights group Aprodeh says at least 70 people, mostly civilians, have been killed and hundreds of others wounded following weeks of political unrest in the small country in the African Great Lakes region of East Africa. The violence started after Nkurunziza announced his controversial bid for a third consecutive five-year term in office. The Office of the UN High Commissioner for Refugees (UNHCR) has said the violence in Burundi has forced more than 100,000 people to flee to neighbouring countries.(Photo by Spencer Platt/Getty Images)