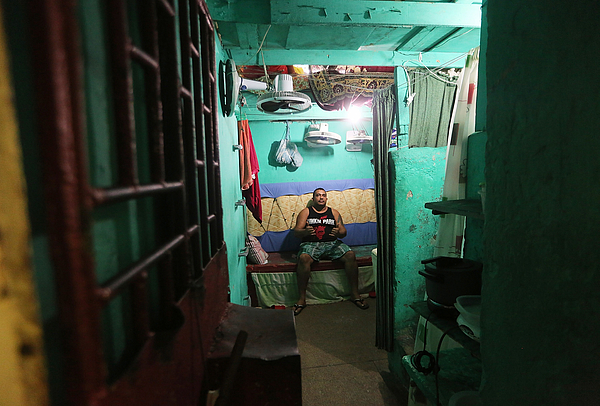 MANAUS, BRAZIL - JUNE 23: A detainee poses in his cell in the Desembargador Raimundo Vidal Pessoa penitentiary, inaugurated in 1904, on June 23, 2015 in Manaus, Amazonas state, Brazil. The aging prison has an official capacity of about 250 but now holds around 700 prisoners. Brazil's Amazonas state prison system now holds nearly three times as many inmates as it was designed for. A new Justice Ministry report states that Brazil holds 607,000 people in its prisons which only have the capacity for 376,000 inmates. The report notes that Brazil's prison population is now the fourth largest in the world, behind the U.S., Russia and China with the number of Brazilians behind bars nearly doubling in a decade. It is the only country of the four whose prison population continues to rise. Justice Minister Eduardo Cardozo has called the situation 'medieval'. A vast increase in minor drug arrests, a dearth of legal advice for prisoners and a lack of political will for new prisons have contributed to the increased prison population. The report comes amidst a controversial new bill that would reduce the age of adult criminal responsibility in the country from 18 to 16 and place further strain on the country's overwhelmed prison system. (Photo by Mario Tama/Getty Images)