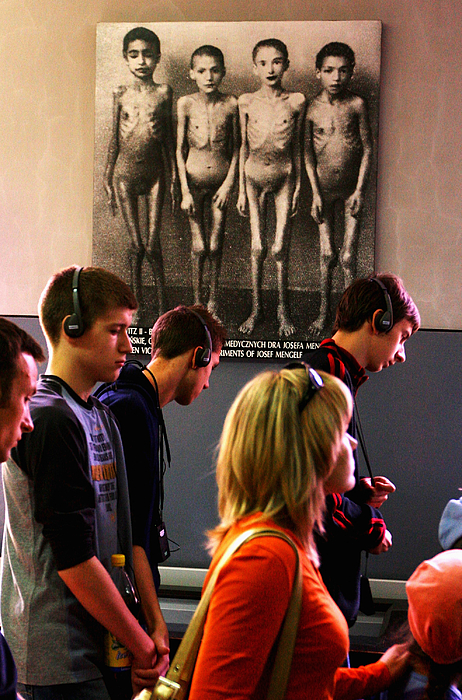 KRAKOW, POLAND - APRIL 30: Tourists listen to information of headphones as they walk past a photograph depicting victims of scientific experiments conducted by Joseph Mengele at the concentration camp of Auschwitz-Birkenau on April 30, 2008 in Krakow, Poland. For five years the name Auschwitz aroused fear among the populations of Nazi occupied territories. It was established in 1940 for Polish political prisoners but as time passed the Nazis began to deport people from all over Europe to the camp, mainly Jews but also Russians, Roma, Czechs, Yugoslavs, Austrians and Germans. As the number of inmates increased so did the area covered by the camp until it was transformed into a gigantic factory of death. From 1942 Aushwitz became the biggest centre for the mass extermination of Jews. Figures vary but a conservative estimate puts the number of murdered Jews at an approximate 1.5 million. (Photo by Chris Jackson/Getty Images)