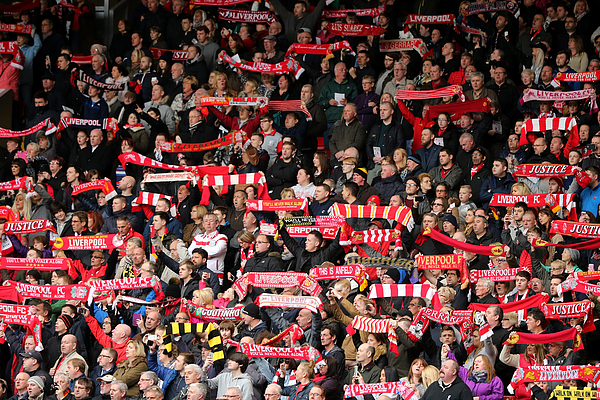 LIVERPOOL, ENGLAND - APRIL 15: Liverpool fans sing 'You'll Never Walk Alone' during a memorial service to mark the 27th anniversary of the Hillsborough disaster, at Anfield stadium on April 15, 2016 in Liverpool, England. Thousands of fans, friends and relatives took part in the final Anfield memorial service for the 96 victims of the Hillsborough disaster. Earlier this year relatives of the victims agreed that this year's service would be the last. Bells across the City of Liverpool rang out during a one minute silence in memory of the 96 Liverpool supporters who lost their lives during a crush at an FA Cup semi-final match against Nottingham Forest at the Hillsborough football ground in Sheffield, South Yorkshire in 1989. (Photo by Christopher Furlong/Getty Images)